Veneto is a region with an ancient olive growing tradition as is testifiedby the remains found on the eastern coast of lake garda, showing  that in this aerea the origin of this cultivation dates back to pre-Roman times.

Olive growing received a strong stimulus in the Middle Ages, when the oil coming from these lands was considered excellent and was used to pay tithes and ground rents.

In the 16th century the Repubblica Serenissima considered the Benaco basin as land of olive trees and vineyards and oil production centre for the whole of northern Italy.

Although Veneto is situated in a more northern position than it is generally ideal for olive growing, its particular microclimate, influenced by the presence of the lake and the fertile morainic grounds makes possible cultivations typical of more southern area, like oleander, palm tree, grapevines and also olive trees.

Olive oil is therefore not only a notable economic resource, but also an important element of the material culture of Veneto.

Villa San Carlo was a farmhouse in the 17th century  when grapes and olives were already cultivated. Then it was bought by a noble count called Martinelli in the 18th when he established developed vinyards and olive groves. At 1920 he restored the house in neoclassic style as we see it today.

The  estate then bought in 1958  by Pavesi family is located on the slopes of a west facing  hill not far from Verona  and is still an uncontaminated 70 -hectare oasis with an ancient dry stone terraces for the cultivation of vineyards, olive groves and orchards surrounded by a wide strip of woodland an intact territory thanks to agronomic practices respectful of enviroment.

Today they run 10 hectares with 1500 olive trees, the Grignano, Favarol, Frantoio, Leccino e Pendolino cultivar varieties are monitored during the growth and ripening phases to ensure an excellent olive harvest without altering the region’s morphology or damaging the environment. The crucial phase of ripening is carefully monitored to establish the best moment to begin harvesting, which generally starts between the beginning of October and the end of November.

The Product of Villa San Carlo 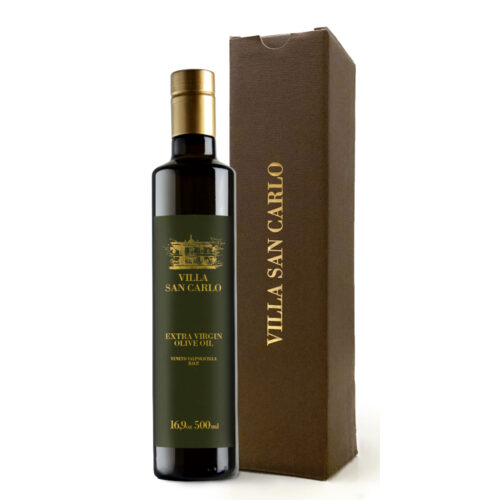