The winery Sociale di Quistello was born in 1928. 90 years have passed since a group of vine-growers constituted it.
But we like to think that our winery funds its roots in a much more ancient history. A story made of both peasants and poets. A story that reminds me of a very distant time!
The production area of Lambrusco Mantovano is in fact an area of ancient wine and gastronomic traditions and to find the first traces of “Labrusca” or “Lambrusca”, as they were initially called the vineyards from which our wine derives, it is necessary to turn the Look at the past.
A few km southeast of Mantua, for example, rises an important Etruscan settlement of the VI_IV century A. C: The archaeological Park of the Forcello. The Forcello, located in the commune of Bagnolo San Vito, has returned a wealth and variety of exhibits really exceptional. And among these there have been very precious amphorae for wine transport.
These findings support the thesis that the local wine was exported for a long time.
The Adriatic Sea road that came from the Aegean, used the port ports of Adria and Spina, in fact it allowed to reach in a fairly easy way the Po valley, through the river routes.
The “Labrusca” was known beyond that by the Etruscans also by the Romans. Some precise references of Latin writers in their works can be considered, in this sense, of the precious documents, on the presence of this vine and on how it was known also by the Roman population.
It is almost 2000 years ago, for example, the quotation of the “Vitis Labrusca” in the fifth bucolic of the poet Mantovano Virgilio, which was evidently a precious and direct witness of the presence of the Lambrusco grape in the territory of Mantua!
To date it is not possible to accurately trace when the cultivation of Labrusca vine has been taken into account in the way it is conceived in the present day!
Certainly the cultivation of the vine assumes a fundamental value at the end of the eleventh century with the Benedictine monks in the territories of the abbey of Polirone in San Benedetto Po. The monks established to the tenants the payment of an annual tribute (the Preménda). The Economist Ugo Ruberti made known as the peasants, used the grape of the vineyards of Lambrusco to ensure a high quality wine much appreciated by the monks for the taste, the perfume and even the intense color. (Besides Pliny the Elder in Naturalis Historia writes “… the Vitis vinifera whose leaves, like those of the Labrusca vine, become blood-coloured before falling…”…)
Ugo Ruberti, a Quistellese scholar, expert in agriculture and viticulture, owes the discovery of the autochthonous vineyard Grappello Ruberti. Historical testimonies of this grape are present from the early ‘ 900, when the famous ampelographer from the Boulder declared in a conference of 1939 that for a long time the Ruberti Grappello had been the only vine grown in this area.
In 2013 the Ministry of Agriculture officially recognized the Ruberti Grappello as a vine whose autochthonous grape “is diffused mainly in the Oltrepo Mantovano and in particular in the area of the winery sociale di Quistello”!
Ugo Ruberti, a Quistellese scholar, expert in agriculture and viticulture, owes the discovery of the autochthonous vineyard Grappello Ruberti.
What we have simply told you is a part of a truly suggestive story that embraces centuries, populations and territories!
It is the story of a wine we love and to which we devote our work with commitment and passion aware of the privilege we have in advancing this story as long as it is special.

The products of Cantina Quistello 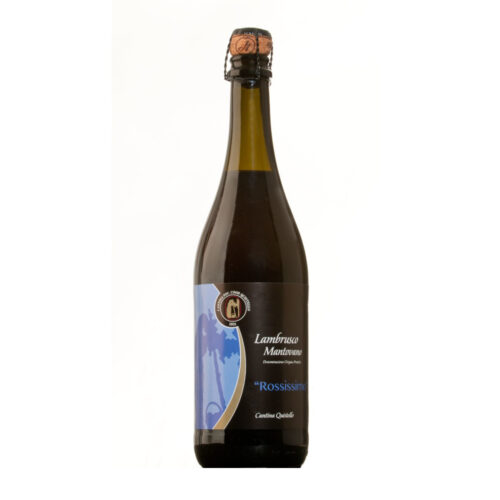